The last weekend of League of Legends hosted by West Coast Elite was filled with loads of talent from Northern California.  Here are some of the standouts from this past weekend.

Derrick Claxton (2022 WCE 17u UAA Norcal) - Becoming one of the top prospects in Norcal, the 6'6 wing has an endless motor that sets him a part from the rest. Currently an excellent slasher showed he has a nice shooting touch this past weekend. He picked up an offer from UC Riverside after his weekend performance.

King-Jhsanni Wilhite (2023 SFBC) - Absolute scorer from anywhere on the floor, got to the rim at will where he was able to get to the line or dump off to his teammates for a easy bucket. Will have a tremendous career at Riordan HS for the next 3 years

Robert Vaihola (2021 SFBC) - The 6'8 big dominated the paint once again on both ends of the floor, grabbed every rebound around his area and continues to show his array of post moves around the rim. A sure fire D1 prospect that will be off the board soon.

Lee Hubbard III ( 2022 SFBC) - A true pass first point guard that made sure all of his teammates were well fed all weekend long. Lee has added 10+ pounds of muscle and makes him a defensive nightmare on defense and going to the basket. Lee is also showing a lot more confidence with his jump shot knocking down multiple 3 points throughout the weekend. 4-year schools get ready as he will open a lot of eyes this year.

Ben Roseborough (2024 WCE 16UAA Norcal) - Known as one of the top 2024 prospects in America. Ben matched up against Vyctorius Miller and proved why he is considered one of the best in the country. He showcased his elite shooting ability whether it was off the catch or bounce. But what surprised many was  his ability to create shots for his teammates.

Courtney Anderson (2023 WCE 16UAA Norcal) - Courtney wow'd the crowd with many amazing dunks in traffic, he showed that he can score in a variety of ways. Most notably his effectiveness in the mid-range. As he gets strong throughout these next 2 years. He will be climbing up the rankings boards frequently.

Courtney Anderson Jr. is next up out the Bay @Courtneyjr_4

Darius Smith (2023 WCE 16UAA Norcal) - A hardnose guard that brings toughness to the team, he has a nose for the ball and makes winning players.

Miles Lewis (2021 CPAO) - The lead guard showed he can run a team and create for others. The standout from Sac HS is doing a post grad year at CPAO and has made huge strides to his game. With a quick first step, Miles was able to get 2 feet in the paint and create for his teammates for nice dunks!

Miles Lewis (2021 CPAO) - The PG had an amazing weekend at @WCEBball League of Legends.

Malaki Harris (2021 CPAO) - The 6'6 wing out of Marysville is a smooth operator and knocked down NBA range shots all weekend long. With long arms he can take up space on the defensive end has the tools to be a division 1 player.

Jaden Alexander (2021 WCE 17u UAA Norcal) - One of the top unsigned seniors in Norcal already known for his out of this world athleticism. Jaden showcased his improved jump shot knocking down multiple spot up 3 pointers and pull up midrange shots. Will not be surprised if more colleges come into the picture after this performance.

Jaden Alexander (6’4 2021) already known for his athleticism... his jump shot starting to match!

Jordy Mckenzie (2024 WCE 15u UAA Norcal) - Put on a dunk show in warms up and showed that he was more than pre game highlight reel. He shot it consistently from the outside all weekend long and caused a lot of problems for opponents on the defensive end.

Ashan Huff (2024 WCE 15u UAA Norcal) - The 6'5 forward was the ultimate rim protector blocking shots and finished strong around the rim all weekend long. Ashan will be attending Vanden HS where he will compete with Takai Hardy every day in practice. Expect Ashan to be one of the top prospects in Norcal by the time he finishes high school.

Jarod Webb (2021 WCE 17u Central) - Led the team in scoring all weekend long and helped lead his team to a upset vs a very talented Arizona Select team. Jarod has an excellent shot off the dribble and finishes well around the rim in transition. One of the best unsigned seniors in Norcal.

Meet The Oakland Soldiers 17u EYBL

The 17u EYBL squad kicked off for the Oakland Soldiers their spring/summer season at their Extravaganza. Here is the listed roster for the 17u EYBL squad.  Jordan Aquino (2022 Lincoln-SF) Jordan...

Meet the Oakland Soldiers 16u EYBL

The pandemic season is officially underway and 2 of Norcal's very best programs faced off. The Bishop O'Dowd Dragons and Archbishop Mitty Monarchs both features 2 division 1 commits...

NorCal Players in the 2021 NBA Draft 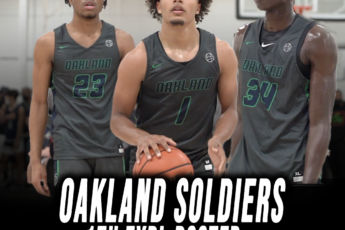 Meet The Oakland Soldiers 17u EYBL

May 17, 2021
The 17u EYBL squad kicked off for the Oakland Soldiers their spring/summer season at their Extravaganza. Here is...

Meet the Oakland Soldiers 16u EYBL